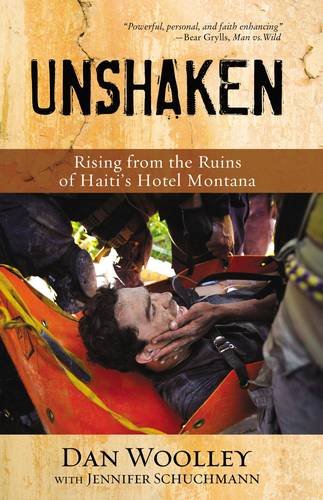 After a last-minute hotel switch, no one, not even Dan Woolley’s wife, knew where he was staying when the 7.0 earthquake hit Port-au-Prince, Haiti, on January 12, 2010. Just moments after walking into the lobby of the Hotel Montana, Woolley watched the walls buckle as the six-story hotel collapsed on top of him. In a harrowing story of survival, he recounts the nearly three days he spent trapped beneath the rubble. He details his survival methods―including using an iPhone app to treat his life-threatening injuries, conversations with strangers buried nearby, letters to his family, and the small and large decisions he made that affected his chances of surviving the Haiti earthquake that took the lives of hundreds of thousands of people. Unshaken includes a 16-page color insert and the heartrending reflections from Woolley’s wife, Christy.

Unshaken: Rising from the Ruins of Haiti’s Hotel Montana